Golf Tips to Keep Your Game Sharp in the Winter 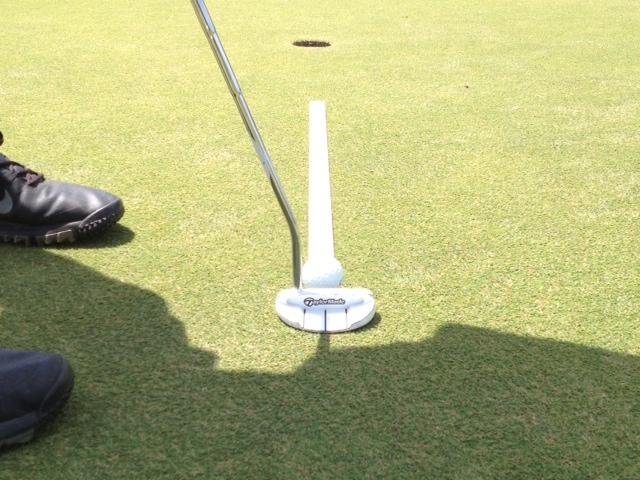 It’s an annual golf ritual. We play all year long and then, as soon as the cold weather of winter arrives, we sadly put our clubs in hibernation. Several months later when spring arrives, we finally head back out to the course, only to find that the game that we had in the fall is gone. And, unfortunately, it usually takes several weeks (or longer) to get it back.

Well, it doesn’t have to be that way. There are many things that you can do during the winter months to keep your game in shape, so that you’ll be able to hit the ground running when the new golf season begins.

This article will offer suggestions that you can do this winter to keep your game sharp. And the best part? You can do each of them right from home.

Obviously, there are countless things that could be worked on. But we’ve zeroed in on what we feel are the three key areas that can have the biggest impact on your game (and your score) when it’s time to get back out there:

Practice to Achieve a Square Face Angle When You Putt

Here’s some eye-opening facts about putting:

From just five feet from the hole, a putter face that is open or closed a mere 2 degrees will entirely miss the hole.


What’s the takeaway from these stats? That having a square face angle at impact is crucial if you want to make putts. And the fact is that a faulty face angle is one of the main reasons that amateurs miss putts and is the source of many wasted strokes each round.

Fortunately, this is an area that can be significantly improved with some practice—and there’s nothing like a few months of winter putting on your carpet at home to address this particular issue—if you’re working on the right things:

Working on Your Grip in the Off Season

The first thing to consider is your grip. This is an easy thing to work on as you perform your home practice putting routine. Many amateurs are not aware that the putting grip is not the same as the full-swing grip.

On the full-swing, it is proper to grip the club in your fingers, rather than up in the palms. Gripping in the fingers fosters a full release of the club which naturally creates some club face rotation.

The grip when putting, however, is just the opposite. This is a stroke in which you want to avoid rotation of the club head, so gripping in the fingers is counterproductive. You should make sure that the club is being positioned along the lifeline of your hands, higher up in the palms. This will lessen the amount of putter face rotation and give you a better chance to have a square face angle through the impact zone.

Some Home Drills to Perfect a Square Face Angle

Perfecting Your Chipping Motion: Get Rid of the Flip

Chipping is another area that often costs amateurs several strokes during their rounds. Getting just a little bit better at this part of the game will definitely result in lower scores. Think of it this way. Since mid- to high-handicappers miss at least half the greens in a round, they’re required to chip numerous times. Getting up-and-down on just two or three of those missed greens would make a big difference on the scorecard. And that means improving your ability to chip effectively.

Although it’s a little harder to practice chipping in your house, it can still be done. And there’s a great drill we’ll offer where you don’t have to risk damaging your furniture or breaking a window!

The Key Problem to Address? Flipping at Impact

A very common mistake that amateurs make when chipping the ball is to flip their wrists at impact. This is usually caused by one of two reasons … and often both.

The first cause is a subconscious effort to “lift” the ball. There is often an urge to get the ball airborne, and in the attempt to do that, many amateurs improperly flip their wrists. The second reason is that the body stops rotating on the downswing. If the body stops turning, the wrists can take over.

How can you tell if you’re flipping? A wrist flip is characterized by the butt end of the grip actually moving away from the target as your right hand overtakes your left hand going through the impact area. Ideally, you want a firm left wrist coming into contact slightly ahead of a soft right hand, with a descending strike on the ball.

So how can you ingrain the feeling of the proper chipping motion, where your wrists remain fairly quiet, and you allow your body to turn toward the target after impact? Here’s a good way: Practice your chipping technique with a broom! 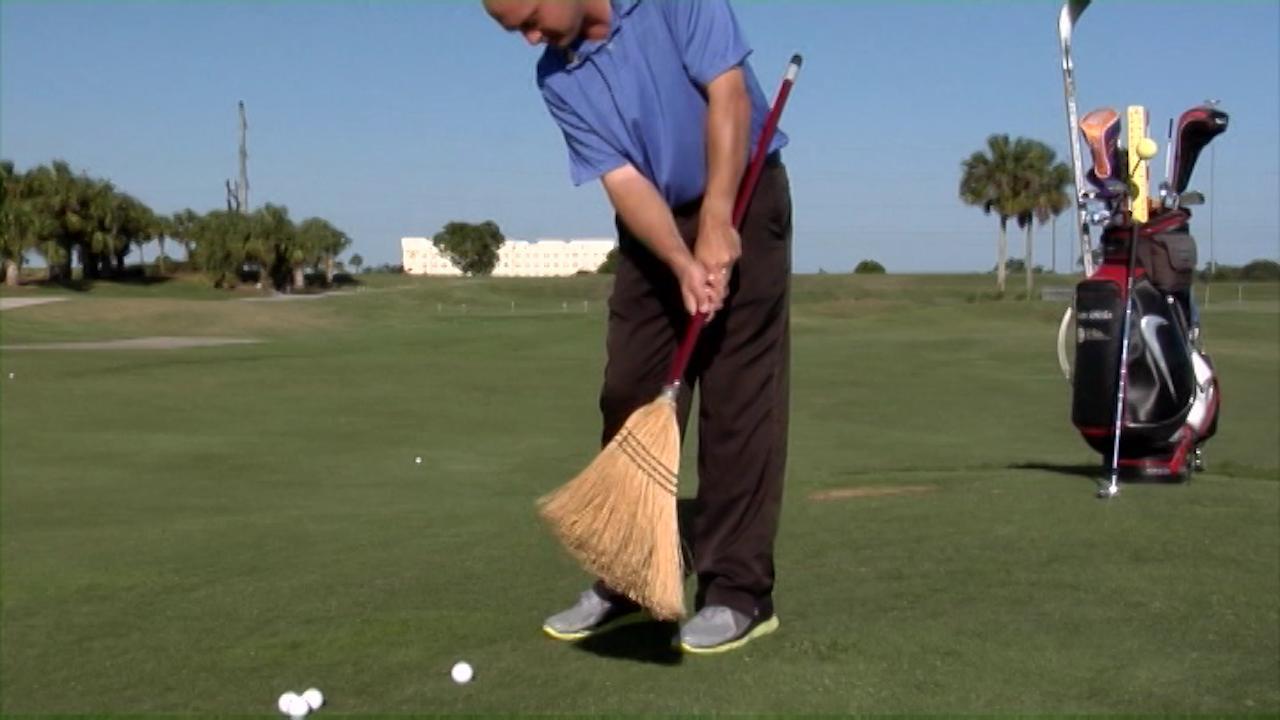 Grip about halfway down the broom, so that the handle extends up past your left hip. Take some practice chipping strokes, trying to keep your hands and wrists quiet, and rotating athletically so that you are facing the target after impact.

What you are trying to do is to execute your “chip” without the broom handle touching your left side. If you flip your wrists during the motion, or if you stop your body rotation, the handle will hit you in the side, a reminder that your hands and wrists were too active. Keep practicing until you can make a normal chipping stroke where the broom handle does not contact your side.

When you get back out on the course next spring, after a few months of ingraining this new chipping motion at home, you’ll find that you’ll hit far fewer chunked and skulled chips—and you’ll suddenly be posting much lower scores.

Note: For help on your putting and chipping, and all other aspects of your game, make sure to reach out to Ed Fisher, Director of Instruction, or his staff, at Rogue Valley CC

Would you be surprised to learn that one of the best ways to sharpen your game over the winter months doesn’t even require touching a golf club? Yes, it’s true and there’s a lot of science to prove it. Instead of focusing simply on your swing mechanics for the next few months, use this time to focus on improving your flexibility.

Most golfers don’t fully appreciate the importance of getting as fit and flexible as possible as a way to improve their golf swing.

Think of it this way. The golf swing is a very demanding, complex set of coordinated movements that requires certain levels of strength and mobility to be able to execute it properly. If your body is incapable of allowing the relevant muscle groups to reach their full range of motion during each phase of the swing, then it will react by making compensating motions that are often detrimental.

In fact, many swing flaws are a direct result of a lack of flexibility. Being unable to get in a proper posture at address, having a restricted shoulder turn, losing your spine angle during the swing, exhibiting the dreaded flying elbow at the top of the backswing or the chicken wing on the through-swing—these (and many others) are all swing defects that can often be traced to having muscles that are taut and inflexible. And muscles that are too tight are generally short and weak.

Getting Older Only Worsens the Problem

As we get older, we lose a great deal of the flexibility and mobility that we used to take for granted. We’ve all experienced it. Simple movements that we used to make with ease are now more labored, and are often accompanied by stiffness, a reduced range of motion and, yes, sometimes even with pain.

But, in addition to this mobility issue, aging is also sadly accompanied by a loss of muscle strength. The technical name for this process is Sarcopenia, and it’s defined by both the actual loss of muscle mass and the loss of muscle function as we get older.

Some people are blessed with a natural looseness that extends into their middle-age years, while others are forced to face this loss of flexibility much sooner. But make no mistake. Sooner or later, we will all succumb to it. As much as we’d love to defeat Father Time, his record is pretty impressive. In fact, he’s undefeated.

The Answer is Stretching

Simply stated, how well the muscles function and interact with one another determines how well the body swings the club. Golfers who have strong, flexible, and functional muscles are better able to execute a proper swing than those with weak and tight muscles. This is as true for golfers who are relatively young but may suffer tightness due to inactivity, as it is for more “experienced” golfers whose bodies just don’t move the way they used to.

Fortunately, the transformation to longer, leaner muscles doesn’t require a gym membership. Doing golf-specific stretching (i.e., stretches that specifically target the primary muscle groups involved in the golf swing) can be done right from the comfort of your home. Doing this just a few times a week over the winter can make a world of difference to the golf swing that you take to the course when the weather starts to improve in the spring.

Note: You can do these exercises at home or, if you’re so inclined, you can take advantage of the fully equipped and professionally staffed Fitness Club at Rogue Valley CC. They have personal trainers who can design a program for you that will get your body ready for better golf.

Fortunately for Rogue Valley C.C members, winter temperatures are such that an occasional round of golf is still possible. But it’s probably a safe bet that, for most, their amount of play will be significantly reduced. But that shouldn’t be a reason to let your game regress.

As we’ve described, there are lots of ways to keep your game (and your body) sharp over the winter months, so that you’ll be closer to you’re A-game when you get back to your regular golfing schedule. These suggestions have the potential to make the game you unveil in the spring even better than the one you had in the fall.